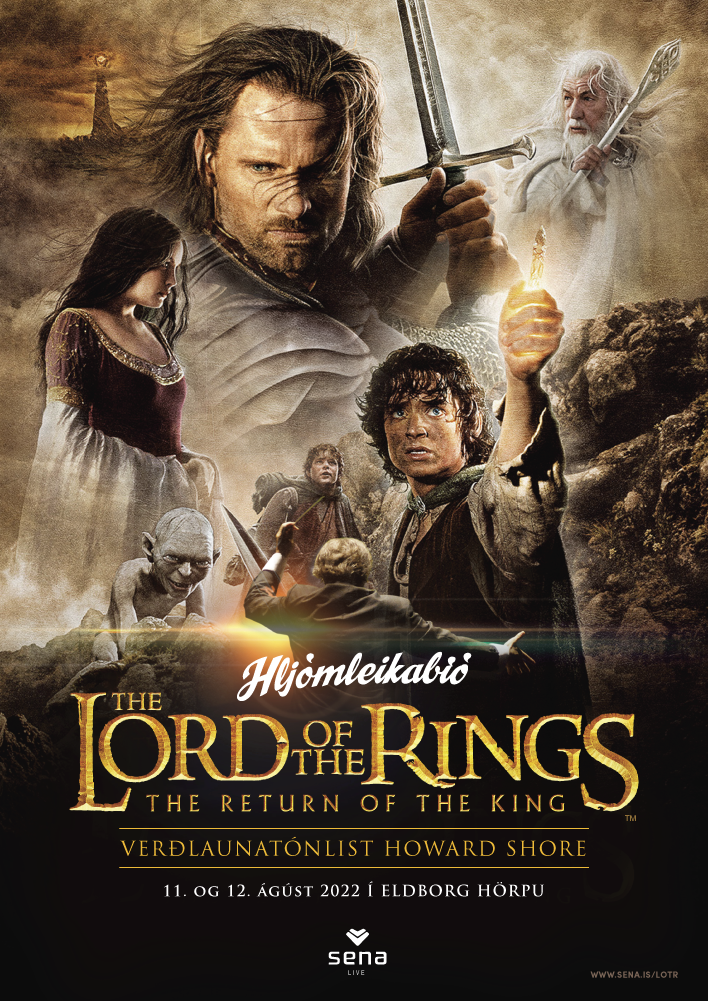 The Lord of the Rings: The Return of the King

The Lord of the Rings: The Return of the King

Days of the Ring

THE LORD OF THE RINGS: THE RETURN OF THE KING

The Lord of the Rings – Live to Projection invites audiences to experience J.R.R. Tolkien’s Middle-earth like never before. As ever, the author’s indelible tale conveys a nearly illimitable sense of wonder and detail. Peter Jackson’s timeless films transplant the story’s scope and thrills from the mind’s eye onto the silver screen. Now, Howard Shore’s music takes center stage to impart the heart and soul of this epic adventure.

Positioned beneath an immense projection screen, nearly 300 musicians will perform Shore’s three-hour score to The Lord of The Rings: The Return of the King carefully synchronized to the film. This unique performance allows the original 2003 score to bear the narrative weight, creating a wholly new and dramatic live concert experience.

The music of The Lord of the Rings is counted among film music’s most complex and comprehensive works. Howard Shore’s score is as rich and thoroughly realized as the story that inspired it. The complexity and grandeur of Middle-earth and the great War of the Ring are transmitted through the interlocking leitmotifs and grand vistas of Shore’s expressive writing.

Doug Adams is a Chicago-based musician and writer.
He is the author of The Music of the Lord of the Rings Films.

The Fellowship theme, after forming then breaking, must draw itself to a newfound level of heroic focus as the Company reaches Mount Doom. The Elves’ themes must bestow their final melodic gifts upon Middle-earth before receding into the West. Isengard’s metallic fury must meet its wrenching demise, but not before scraps of its rhythmic and melodic gestures migrate to Sauron’s domain and join with Mordor’s twisted themes, which are consolidating into their own terrible apotheosis.

Combating Mordor’s rise, the two kingdoms of Men summon their might—Rohan by aligning itself with Nature’s Reclamation, Gondor by calling upon the two grand themes established in The Fellowship of the Ring, the Realm of Gondor and Minas Tirith. These two lines, heretofore heard in isolated statements, are brought to the fore in The Return of the King, assuming lead roles in the breaking war.

And yet it is the Ring itself, that slim band of gold that has become the focal point for all Middle-earth, that undergoes the most profound and disturbing musical fusion. The Ring’s long journey to Mordor is nearing completion. Heeding its master’s call, the Ring has united its characteristics: Shore’s three principle Ring themes—History, Seduction and Evil—now impact each other directly, intertwining contrapuntally or pulling at melodic contours to form new lines, exposing the Ring at the dangerous height of its wicked promise.

In the end, Middle-earth survives the War of the Ring to enter its Fourth Age. Ushering in a new dawn of peace and unity, Shore grants the surviving cultures Fourth Age themes that maintain the aesthetics of each society, but which cultivate newly enlightened ideals. Men are granted respite; the Elves, peace; hobbits, wisdom—and the Ring is granted its just fate: destruction.

THE FELLOWSHIP OF THE RING
The Fellowship of the Ring was broken at the end of the first film. The Two Towers found the members of the Fellowship scattered, but no less determined. Likewise, the Fellowship theme lacked the weight and heroism it once displayed, but it braved adversity unwaveringly. In The Return of the King, however, the Fellowship theme soars to new heights. At the story’s climax, the theme expands past the orchestral palette into the chorus which proudly sings, “Cyll e-Gorv, Le annon beth nín, Ú-erir aen han risto, Ú-erir aen han presto / Ringbearer, I give you my word, It cannot be broken. Nor turned aside . . .” as the Fellowship rushes the Black Gate.

THE SHIRE & THE HOBBITS
This theme is composed of basic and unadorned musical elements. The diatonic melody hints at a simple pentatonic scale while the harmonies present only a sensitive handful of chord changes. Because this tune is so simply and flexibly constructed, Shore is able to create several distinct variations out of the material. In The Return of the King, these variations are augmented by several distinct Heroic Settings of the Shire theme, which transform the gentle melody into a fanfare.

THE WORLD OF MEN: ROHAN
The Rohirrim’s love for their land is embedded in every turn of phrase present in their theme. The songful melody is equally at home in proclamatory brass or the intense, thoughtful strains of the Hardanger, a Norwegian fiddle. The Return of the King expands the theme, altering its intervals and modes and striking a more forceful profile as the Rohirrim ride to Gondor’s aid.

THE WORLD OF MEN: GONDOR
The Gondor music, which skirted the edges of Fellowship and The Two Towers, now comes to center stage as Mankind faces its greatest challenge. Two proud brass-dominated themes stand for Gondor in The Return of the King—the leaping Realm of Gondor theme and the more introspective Minas Tirith theme. The Realm of Gondor represents the kingdom’s might and pride, but it is the thoughtful Minas Tirith theme that will survive into the Fourth Age.

GOLLUM
Gollum’s Menace
The cimbalom, a distant relative of the dulcimer, represents Gollum’s heritage with twitchy chromatic figures. In The Two Towers this instrument represented but one aspect of Gollum’s split personality. In The Return of the King, however, Gollum has decided to kill the hobbits by leading them to Shelob, the giant spider. Thus, his villainous inclinations bared, this theme alone represents the character throughout most of The Return of the King.

SHELOB
Shore’s music for Shelob is an orchestral tour de force, as well as the densest and most psychologically unsettling writing in the score. Though a recurring (and appropriately arachnidan) eight-note motif treads through the writing, it is the heavy web of orchestral counterpoint that makes Shelob so unique. Her music is written and orchestrated to undermine any sort of stability—a constant swarm of activity, tripping forwards and backwards unpredictably.

MORDOR
Mordor is morbid, threatening and sinister—this music favors low strings and the deepest registers of brass, fused to create a thick fog of overtones. Mixed choruses erupt into primal rhythms with abnormally close-spaced harmonies for a towering, ritualistic effect.

Mordor/Sauron (The Evil of the Ring)

The primary motif for Barad-dûr and Sauron is identical to the One Ring’s Evil theme. (The three are practically interchangeable story elements.) Shore uses this theme to portray the Ring’s “character,” but it also represents its effect upon the world.

NATURE’S RECLAMATION
The Nature music spends most of its existence resisting outward manifestations of emotion. It is rarely angry or vengeful. It is, instead, ethereal and restrained—resolute, perhaps, but as a musical balm for the imbalances in Middle-earth. But as the Orc themes infect the musical landscape of Middle-earth, Nature’s Reclamation is spurred to action. In The Return of the King, this theme aligns itself with Rohan as they ride to Gondor. In the end, however, it returns to Nature itself upon the arrival of the great Eagles.

THE ONE RING
The One Ring is the story’s most proactive element. It has three distinct themes to represent its multidimensional nature.

The History of the Ring
In each film, this theme is first heard as “The Lord of the Rings” text appears, and reappears whenever the One Ring changes hands or marks significant progress in its journey. In The Two Towers The History of the Ring intertwines with Gollum’s Pity theme to illustrate his besetting obsession with the Ring. But in The Return of the King, the History theme begins to intertwine with the Evil of the Ring as the Ring projects its legacy as a threat. Sauron’s hand may again claim the Ring. . .

The Seduction of the Ring
This theme, set in pure, clean choral tones and punctuated by rumbling bass drum strokes, represents the One Ring’s overwhelming allure.

The Evil of the Ring (Mordor/Sauron)
The third theme for the One Ring is an impervious snarl, limited to only four or five pitches, and unwavering in its focus. As with the other ancient powers of Middle-earth, Shore treats this theme to Eastern-tinted harmonic inflections suggesting a past age.

The Destruction of the Ring
The music for the destruction of the Ring and the collapse of Sauron’s domain represents the collision of the History, Seduction and Evil themes for the Ring, intertwining bits of each tune into a meditation on all the Ring has stood for and all that has been reconciled upon Sauron’s destruction. The Ring’s fall and Sauron’s withering complete the journey, vindicating the heroes’ plight and all suffering they have endured.

Additional information available in The Lord of the Rings: The Return of the King – The Complete Recordings on Reprise Records, in the book The Music of the Lord of the Rings Films by Doug Adams, and online at http://www.musicoflotr.com/

Howard Shore, Composer
Howard Shore is one of today’s premier composers whose music is performed in concert halls around the world by the most prestigious orchestras and is heard in cinemas across the globe.

Shore’s musical interpretation of J.R.R. Tolkien’s imaginative world of The Lord of the Rings and The Hobbit, as portrayed in the films directed by Peter Jackson, have enthralled people of all generations for years. This work stands as his most acclaimed composition to date awarding him with three Academy Awards, four Grammy Awards, two Golden Globes as well as numerous critic’s and festival awards.

He is an Officier de l’ordre des Arts et des Lettres de la France and has also been recognized by Canada with the Governor General’s Performing Arts Award. The National Board of Review of Motion Pictures honored Howard Shore with an award for Career Achievement for Music Composition and the City of Vienna bestowed him with the Max Steiner Award. Shore has received numerous other awards for his career achievements.

Perhaps most notable from his early career, Shore was one of the creators of Saturday Night Live and served as musical director from 1975 – 1980. At the same time he began collaborating with David Cronenberg and has since scored 15 of the director’s films, including The Fly, Crash, and Naked Lunch. He was awarded Canadian Screen Awards for Maps to the Stars for score and Cosmopolis for both score and song. His original scores to A Dangerous Method, Eastern Promisesand Dead Ringers were each honoured with a Genie Award. Shore continues to distinguish himself with a wide range of projects, from Martin Scorsese’s Hugo, The Departed, The Aviator (for which he won his third Golden Globe Award) and Gangs of New York to Ed Wood, Se7en, The Silence of the Lambs, Philadelphia, Mrs. Doubtfire and his most recent score for Tom McCarthy’s Academy Award-winning Film Spotlight.

Other recent works include the piano concerto Ruin and Memory for Lang Lang (2010), the song cycle A Palace Upon the Ruins featuring mezzo-soprano Jennifer Johnson Cano (2014), a cello concerto Mythic Gardens featuring Sophie Shao(2012), and Fanfare for the Wanamaker Organ in Philadelphia (2008).

His opera, The Fly (2008), which premiered at the Théâtre du Châtelet in Paris and at Los Angeles Opera, recently completed a successful run in Germany at Theatre Trier.

Peter Jackson, Director
Jackson has made cinema history in making The Lord of the Rings film trilogy, comprising nine hours of a continuous cinema that can be enjoyed by audiences worldwide. The films have become a phenomenon cross culturally around the world, not only embracing the respect of established Tolkien fans and scholars, but introducing young audience to Tolkien’s classic novels. He was awarded three Academy Awards for Best Director, Best Picture and Best Adapted Screenplay for The Lord of the Rings: The Return of the King.

The Lord of the Rings, The Return of the King and the name of the characters, events, items and places therein are trademarks of The Saul Zaentz Company d/b/a Tolkien Enterprises under license to New Line Productions, Inc. All Rights Reserved.